Feel the energy of these advocates asking the U.S. Senate to ratify the CRPD “Disability Treaty”! Six minutes with captions:

Want to know what the CRPD says? Read the full text for yourself.  Or, if you prefer, you can just read a brief summary at http://bit.ly/CRPDoverview.

Finished calling the two Senators for your state?  Or, live in disenfranchised DC?  Consider calling a few more Senators!

Yes, each phone call is counted even if you have called on the same issue many times before.  Winning CRPD ratification is partly a game of numbers: we lost at our first attempt at U.S. ratification in December 2012 because people believing in conspiracy theories about the UN flooded Senators with more phone calls than CRPD supporters.  Please don’t let this happen again.  We need to boost the number of our calls to Senators in order to win.  One easy way to do this is to either call more Senators, including Senators from other states, or else call Senators multiple times, or both. 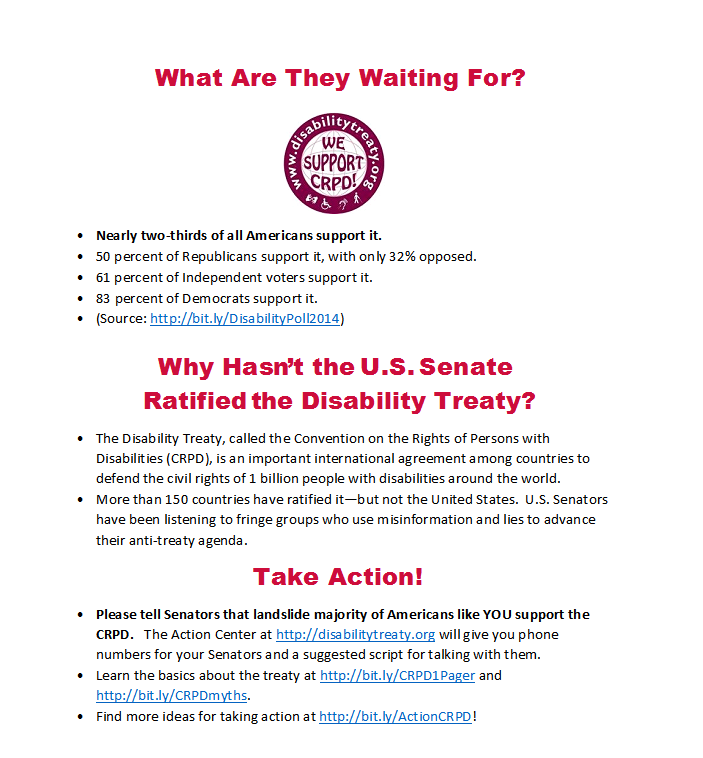 For people who cannot see the image, I provide the same text below:

What Are They Waiting For?

Why Hasn’t the U.S. Senate Ratified the Disability Treaty?

Yes, the campaign for U.S. ratification of the “Disability Treaty” continues!   We still need your support to move forward the struggle for the human rights of 1 billion people with disabilities around the world!  This isn’t a quick sprint, this is an ongoing marathon.  And like any other marathon, getting this treaty passed requires persistence from all of us!  It isn’t over until it’s over!

If you’ve done all the above and now want to call more Senators in addition to your own, here are some who need to hear from more CRPD advocates:

Edited (July 24, 2014) to add this paragraph: The Disability Treaty has passed a major hurdle that we have been working toward during more than 18 months of sustained campaigning!  The treaty (called the Convention on the Rights of Persons with Disabilities, CRPD) has been passed out of the Senate Foreign Relations Committee. This means we are a major step closer to ratification–but we’re not there yet.  We still need your help calling Senators to ask them to ratify.  The Action Center at http://disabilitytreaty.org can help you with phone numbers and a script for talking with your Senators’ staff.  With the Disability Treaty passed out of committee, Senator Reid could schedule a Senate floor vote at any time.  Things may move VERY QUICKLY from here on out.  Although I try to post alerts here when I am able, sometimes there is simply too much to do.  The best way to ensure you don’t miss any important opportunities to take action is to subscribe to the CRPD Action Alert mailing list at http://disabilitytreaty.org/app/register?1&m=9605.

The text of the original blog post (posted on July 18) follows below:

Thank you to everyone who called their Senators this month and expressed support for the Convention on the Rights of Persons with Disabilities (CRPD)! Based on your incredible show of support, Foreign Relations Committee Chairman Menendez has scheduled a mark-up hearing on July 22nd! (Senators will propose and vote on Amendments for the CRPD, then vote it out of Committee).

We need your help! It is critical! We cannot stop now: The world is watching!

Your Senators need to hear again from you and know that you support the CRPD! Show the community is behind this treaty and that we want the process to keep moving forward to a Floor vote!

Visit our citizen action portal,www.disabilitytreaty.org, to find yourSenators information and CALL them! They need to see that we want this NOW or we will not succeed.

​ Or, find more stickers at http://bit.ly/CRPDprofile!

If you would like to the join the next National Youth and Campus leaders call, please contact Andrea Shettle at AShettle@USICD.org.

Help bring attention to the “Disability Treaty” (Convention on the Rights of Persons with Disabilities, CRPD)!  We need the U.S. to ratify this important international human rights treaty protecting the civil rights of 1 billion people with disabilities worldwide.  Sign up your Twitter, Facebook, or Tumblr account NOW to join the next “Thunder Clap It” for the CRPD at http://thndr.it/1ky8p97 !

What’s A “Thunder Clap It”?

A “Thunder Clap It” is when 100 or more people sign on their Twitter, Facebook, or Tumblr account to all send out the same message at the same time to all their followers.  To participate, you need to sign up in advance.  The next CRPD “Thunder Clap It” will be at 2pm EST on June 10, 2014 (1pm Central Time, 11am Pacific Time).  Sign up BEFORE this time or you will miss the Thunder Clap.

Learn more about the CRPD and other ways to help at http://disabilitytreaty.org.  Sign up for the CRPD “action alert” mailing list at the link!  Ask your friends to do the same!

The weather isn’t the only thing heating up this summer. What’s also heating up is the U.S. campaign for the “Disability Treaty”—an important international treaty upholding the civil rights of 1 billion people with disabilities around the world. We need youth, students, and other people like YOU to help! You might have missed the April 23rd teleconference call, but please don’t miss the next call on June 3rd led by Coalition leaders DREDF and USICD.

So far, 146 other countries have ratified the “Disability Treaty”, called the Convention on the Rights of Persons with Disabilities (CRPD). But the U.S. has not. And because many countries consider U.S. behavior as precedent for their own, that’s slowing down advances for disability rights around the world. People opposed to international treaties defeated us on our first try to ratify the CRPD in 2012. Please don’t let them win again. YOUR energy and passion could make the difference. We need you NOW to pass the CRPD in 2014!

Learn more about the “Disability Treaty” by visiting http://disabilitytreaty.org or by downloading a simple handout at http://bit.ly/CRPD1Pager.

Want to join our next national teleconference call for youth and student CRPD supporters? This will be on June 3rd at 4pm EST (3pm Central Time, 1pm Pacific Time). CART will be available. Contact Andrea Shettle (ashettle@usicd.org) to learn how to join the call or to request a document that reviews some of the history of the CRPD and ideas for ways to help.

Are you ready to be involved with the national movement for international disability rights?  If so, you are invited to join the next national teleconference call for student and youth advocates at U.S. colleges/universities.  This call will be on Wednesday, April 23rd, at 4 pm EST (3 pm Central Time, 1 pm Pacific Time).  CART (live text transcription on line) will be available.

An important international “Disability Treaty” is being used around the world to promote the human rights of people with disabilities.  So far, 143 countries have ratified the “Disability Treaty”, called the Convention on the Rights of Persons with Disabilities (CRPD).  But the U.S. has not yet joined them.  This has the potential to slow down advances in disability rights in other countries around the world.  We need student and youth volunteers and other campus leaders at U.S. colleges/universities to help change that.  People like YOU!

The U.S. International Council on Disabilities (USICD) and the Disability Rights Education and Defense Fund (DREDF) have been leading a coalition of more than 800 disability, veterans’ human rights, international development, humanitarian, business, and religious organizations in support of U.S. ratification of the Disability Treaty (CRPD).  USICD and DREDF also have been helping guide student and youth leaders in mobilizing their campus communities to take action in support of the CRPD.

If you’re new to the Disability Treaty, learn the basics in this one-page flyer at http://bit.ly/CRPD1Pager and visit http://disabilitytreaty.org.  Then join the call on April 23rd to learn the latest news about the national movement for U.S. ratification of the CRPD.  Find out what other advocates have been doing at U.S. colleges and universities to support the movement.  Bring your energy, idealism, and passion to the call!  Let us help you consider how you can help!

Please contact Andrea Shettle at ashettle@usicd.org to learn how to dial into the April 23rd call or how to connect to the on-line CART service (live text transcription of the call).  Or, if you cannot join this call, please still contact me to receive materials that can help you think about ways to support the national movement.  Join forces with advocates across the country!  Together, we have POWER!